SPR 2019 Annual Meeting & Postgraduate Course  /  Posters - Educational  /  Don't Be Nervous About the Nerves!: A Sonographic Review of the Normal Appearance of Peripheral Nerves and the Spectrum of Disease Pathology That Can Affect Them

Don't Be Nervous About the Nerves!: A Sonographic Review of the Normal Appearance of Peripheral Nerves and the Spectrum of Disease Pathology That Can Affect Them

Purpose or Case Report: At our institution and in general practice, we have observed that ultrasound is an underutilized modality in the field of pediatric musculoskeletal imaging, particularly when compared to its body imaging counterparts and the adult population. Within the spectrum of musculoskeletal radiology, ultrasound can be an especially helpful tool in evaluating the peripheral nervous system (PNS), which can often be challenging to assess on other imaging modalities. For instance, ultrasound offers the ability to carefully trace small nerves and easily allows for comparison to the other, often unaffected or normal extremity, as well as dynamic imaging. This advantage is often not possible on magnetic resonance imaging (MRI), which is currently the primary modality being utilized to assess for nerve pathology. In small children, nerves are often difficult to visualize on MRI, which can be limited by artifact and motion and may require sedation. Due to its superior axial resolution, ultrasound can better visualize the intra-neural architecture, sometimes better than MRI, especially in the case of small nerves. Also, as was demonstrated by one of the cases at our institution, ultrasound was superior in evaluation when there was adjacent surgical hardware which resulted in artifact on MRI. Additionally, we as radiologists, can aid our peripheral nerve surgeon colleagues intra-operatively with ultrasound.

Some of the hesitance in using the modality may be a reflection of a lack of familiarity on the part of both radiologists and technologists with respect on how to image the PNS and uncertainty about the normal and abnormal appearance of these structures. The objective of this educational exhibit is to provide the knowledge necessary to successfully acquire and interpret ultrasound images of the PNS. The topics addressed in the review will include an introduction on how to appropriately obtain images of the major peripheral nerves, how to distinguish between the normal and abnormal appearance of nerves on ultrasound, and the spectrum of pathology affecting the peripheral nervous system. The exhibit will feature a variety of cases from our institution, including examples of neuropathy, post-traumatic focal neuroma, nerve laceration resulting in transection, ulnar nerve subluxation/dislocation, and nerve sheath tumors, among others, with some intraoperative and pathologic correlation.
Methods & Materials:
Results:
Conclusions:

More abstracts on this topic:

Ascent of the conus medullaris level in infants less than 3 months old with borderline or low position of the conus.

More abstracts from these authors:

Prevalence of knee MRI findings in patients with acute versus nonacute knee pain in the sports medicine setting. 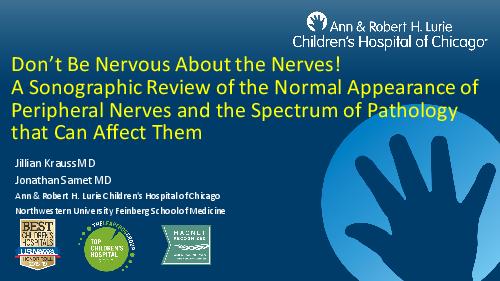 Poster____EDU-053.pdf
You have to be authorized to contact abstract author. Please, Login or Signup.

Please note that this is a separate login, not connected with your credentials used for the SPR main website.

Please, Login or Signup to bookmark this abstract.


Please note that this is a separate login, not connected with your credentials used for the SPR main website.